Dylan is a character. Maybe it was the eleven months he spent in the womb. The doctor said there were claw marks on the walls of my uterus. But he was my miracle baby. It’s possible I lifted those last few sentences from an episode of Arrested Development but they apply equally well to Buster Bluthe and Dylan Barrison. Dylan had to be induced. He wasn’t coming out. Mr. Bear says it’s because I was feeding him cake in the womb, but it’s more likely because the umbilical cord was wrapped around his neck. Of course, we didn’t know this until the moment he was being involuntarily expelled from my uterus and his heart stopped beating. It was all very dramatic and makes for a great delivery story to tell first-time expectant mothers but actually, everything turned out fine (minus some major blood loss on my part, placenta stuck inside of me, separated abdominal muscles, a prolapsed uterus, three hernias and well, you know, the narcolepsy). Dylan Kyle came into the world on Friday, June 29,
2011 at 6:01pm at a whopping 10lbs 12oz despite being due two weeks prior. From the minute this kid was conceived, it’s been a roller-coaster ride in parenting.

Rylie Rose is Dylan’s big sister. She is 3.5 years older than him. They share the same beautiful curly locks, the same beautiful big blue eyes and a jaw-dropping birth weight (Rylie weighed in at 9lbs 11oz) but that is where the similarities end. In every other respect they are completely different human beings. Rylie is the typical first-born daughter looking for gold stars and straight As and Dylan is the typical second born son looking for video games. As a Jewish mother, I have an obligation to tell you that both my children are geniuses but they truly are both very bright. Rylie was advanced in everything – be it academics, physical development or emotional maturity. As a result, she was placed a year ahead in school. She works hard on her studies, takes pride in getting good grades and has a bad habit of telling everyone how smart she is. She is krazy klutzy, has a huge heart, is totally weird in the best way, has blue hair, always stays true to her convictions (be they right or wrong), has beautiful penmanship, is an astute negotiator and is scared of everything (as a general rule, the less innocuous something is, the more terrified she is).  As a toddler, she named all of her toys either Germondo or Frugo. In contrast, Dylan is not afraid of anything, he doesn’t want your gold stars nor does he care to tell  you how smart he is, he calls all his toys Monkey, he refuses to write (despite being ambidextrous), he asks for five minutes when you give him ten and notwithstanding his cataplexy, he is surprisingly coordinated. He taught himself how to read at the age of 3 and has a memory as sharp as my wit. He is scary smart. Rylie is incredibly intelligent. They are both tall and gorgeous. I am fucked. 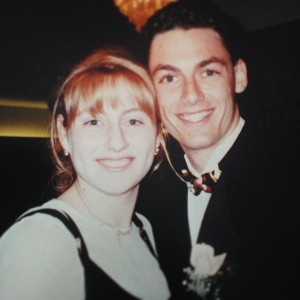 My Jewish mother will tell you that her daughter is also a genius (as she is obliged to say). She will undoubtedly go on to tell you that her daughter was accepted to both dental school and law school in the same year. She still refers to her daughter as a lawyer despite not having practised law in over ten years. I am an only child with all the stereotypical characteristics plus some added quirks for flair. I am a huge klutz (I once took off half my chin while shaving my armpit), years ago I formulated a surprisingly accurate Gold Corolla Theory, I hate stupidity and humidity, I am undecided about the Oxford comma and I suffer from several strange disorders including trichotillomania and misophonia. I may also have narcolepsy but that’s a story for another day.

My hubby has forever been known as Bear – a moniker derived from his last name Barrison. He is a criminal lawyer, with a focus on ensuring “alleged” criminals roam our streets freely. We should all thank him for his public service. As a child he use to hallucinate that Stromtroppers were attacking him, he is a human encyclopedia for the most random facts you’ll never need to know, he was a pretty good athlete in his youth, he knows the capital of every country in the world, he programmed his name to appear as Captain Awesome on my phone and when we were dating he let me put mascara on his eyelashes.

Mr. Bear first laid on eyes on me in high school when I was 15 and he was 17. It was love at first sight (for him). After 9 years of dating, he was lucky enough to call me Mrs. Bear.  After two years of marriage, we became parents for the first time. Rylie Bear was our first, followed by Dylan whose Hebrew name Dov means bear.

As per Jewish law, I am crazy, overprotective, intimately involved in every aspect of my children’s lives and expect them to finish university with one of three pre-approved degrees – law, medicine or dentistry (my predilection is for law of course). In keeping with Jewish law, Mr. Bear is looking forward to the day when he no longer has to financially support our cubs.

And we can’t forget our furriest cub – Chewy Vuitton – the cutest, most cuddliest, most pampered pooch you’ll ever meet.

My dad took me to the zoo the other day. There was only one animal at the zoo. It was a dog. It was shih tzu.

Pics from the family album archives…

2 thoughts on “The Family Ursidae”